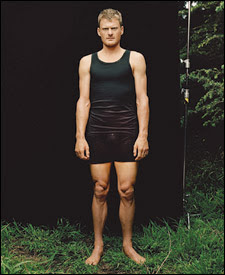 Le Tour de France, one of sports most grueling, competitive events, commenced this weekend. I ride my bike almost daily since I moved to San Francisco- took me a good three months to "get my legs" to go up the damn hills here. Previous to that I would fake that my bike broke down mysteriously at the base of every hill as I'd curse and push it all the way up- until the fateful day I finally realized I was actually pedaling uphill! I had always viewed boxing as the ultimate test of training, self discipline and endurance- until I got on a bike in this hilly town. One round in boxing can be like battling death itself, but so is riding up a mountain, whether it's the Pyrenees or the goddamn Alps for Chrissakes, for days... and weeks!

BTW- Three independent labs that tested urine from Floyd Landis (above), the same sample that tested positive by the French lab which has admitted to botching protocol and contaminating samples, testified at the arbitration hearing that they found it as non-positive- doesn't that mean that (contrary to popular opinion) maybe, just maybe, there's a chance that this man might have been unjustly stripped of his Tour de France win (and livelihood) in 2006?

Now this is where it gets really weird- Alberto Contador, the winner of the 2007 Tour de France, is banned from defending his title this year because... the team that he signed with immediately after last year's Tour win was later banned from this year's Tour (as of this Feb) for a violation they originally committed in 2006! And you thought riding up a mountain was crazy!
Posted by Stan B. at 12:00 AM