I've never been much for those overblown, oversyllabificated pontifications that preface artists monographs. So often they seem to exist for little more than their own sake. Fortunately, we're spared such grand soliloquies in Looking for Evidence- although one would be operating at a distinct loss without reading the highly relevant captions that accompany each image. I was first stunned by the sheer beauty of Eva Leitolf's photographs, seduced by the quality of light and the tranquility of the images. It was only upon reading said captions, that I wanted to know more...

Fortunately, Eva Leitolf obliged. And even though I would hesitate to call this a "formal" interview, it certainly helps explain, at least in part, why this work, so seemingly detached, is so hauntingly effective. 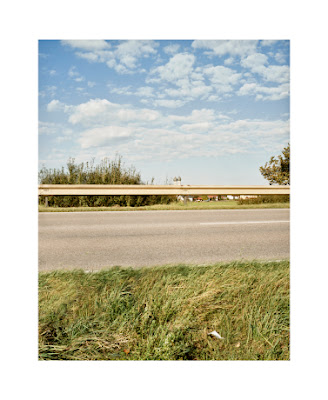 State road, Weihenlinden, 2007
On 16 May 1999 there was a serious road accident on state road 2078, where all five Turkish occupants of the car were killed. Two days later a driver discovered a poster at the scene of the accident bearing a swastika and the words 'the moral of the story - dead Turks don't bother us'. The poster was secured by the police and examined forensically, but the investigation remained inconclusive.


SB:  What first interested you in racial/immigration issues? When did you first think of integrating those concerns with your photography?

EL:  Back in 1992, I was studying photography in Essen and needed to make a decision on the subject of my diploma project.
At that time numerous racist or xenophobically motivated crimes were committed in Germany and I was dissatisfied with the way most of the German news media dealt with it. It was the same picture everywhere: before the crimes occurred there was a massive use of xenophobic metaphors both in pictures and texts (“the boat is full” kind of thing), followed by cover photographs like the one of a seemingly helpless border patrol officer trying to keep a flood of immigrants out of the country (Der Spiegel titled this as “the helpless state”). After the arson attacks, and other racist crimes were committed throughout the country, “The Nazi Kids” made it to the magazine covers and TV news. In this scenario none of the rest of us, of the rest of society, had anything to do with it.
My interest in the subject was closely connected to an interest in how pictures work and, in a more general sense, how meaning is produced through connotation.


SB: How did you come up with the concept of photographing such scenes of violence (depicted in Looking For Evidence) well after the fact? Did you  consider more traditional approaches? Were you aware of Joel Sternfield's On This Site?

EL:  German Images consists of two parts : an early part, from 1992 to 1994, and a recent part, from 2006 to 2008.
At the time I understood the early photographs as an attempt to look for what was there besides the Hitler-saluting skinheads. Going after the fact and to explore the locations beside was a direct reaction to my concerns with the simplistic narrative that was commonly put up by the German mainstream media.
Twelve years later I initially wanted to put a book together with this early work. It had been published in several anthologies but has never found its right form for me. During this process I looked back at several issues around the work that still seemed interesting to explore: the relation of photography and text, the tension between what can be seen, and what is left to the imagination, the way German society deals with racist and xenophobic violence today.
I was aware of Sternfield's On This Site but don´t relate to it too much. I think Sternfeld is rather trying to create a photographic memorial for crime victims than to talk structurally about of how societies deal with crimes, perpetrators or victims. I feel far more influenced by others, for example by Eugene Atget´s sense for the absence, Robert del Tredici´s thorough research practices and Allan Sekula´s theories - Sekula was one of my teachers at Cal Arts in the mid nineties.


SB:  One can't get over just how beautiful these photographs are! Were you ever worried that you would not be able to come up with a visually arresting image at a particular location?

EL: During the two years I was working on the new part of German Images, I traveled to a tremendous number of places that could have been part of the final project. The fact is that racist violence is reported almost everywhere in Germany, and you can find thousands of relevant incidents, both major and minor. So to answer your question more directly: I did not take pictures of all the places I went to.


SB:  What has been the overall reception to this work- from the "art world," news media, social organizations and activists, and last and not least, the immigrant community and those directly affected?

EL:  I can´t describe an overall reception. The work was shown in art venues like the Pinakothek der Moderne in München or the Mildred Lane Kemper Art Museum in St. Louis, in the US. It was well received by German art critics, got published in the Süddeutsche Zeitung Magazin, but got nasty comments in letters to the editors. There were invitations by social or political organizations to show the work which I didn´t accept, because I had the feeling that the work would become exploited in a way I didn´t feel comfortable with. A big surprise to me were the many positive reactions I got via email from all over the world by people with very different backgrounds who came across German Images on photo blogs or on my website.


SB:  I've always been under the impression that Germany has rather comprehensive laws governing hate crimes/speech, esp those involving their Nazi past. And yet I couldn't help notice how many of the crimes reflected in your work were either unsolved or rather lightly punished- which seems to almost condone, or at least tolerate this behavior.  Is this common with respect to other areas of German law, or is this more reflective of the will and attitude of Germans in certain (geographical) areas when it comes to race/immigration?

EL:  There is probably no simple answer to that. The biggest issue in here doesn´t seem to be the legislature. As you said, there are comprehensive laws.
For example, in Rostock-Lichtenhagen, where I went in 1993, the neighbors had watched arson attacks on a housing centre for immigrants and the adjacent Vietnamese homes a year earlier, and applauded them. So it came as no surprise that I was told things like “the way our youngsters did it might not have been the best one, but somebody needed to act and do something about the immigrants”. There are comprehensive theories that an escalation in Rostock was politically intended or at least welcomed in order to speed up and influence the debate on German asylum laws at the beginning of the nineties.
While doing research twelve years later I personally encountered very many concerned and helpful people both within the police forces as well as the prosecution and judicial system. Nevertheless there seem to be problems within these fields as a number of cases suggest.


SB:  Would you consider using a similar approach for other projects? Or were you attracted to this project, at least in part, because you could approach it in such a "nontraditional" manner? What's in the immediate future?

EL: I am as interested in the subject matter of my projects as I am interested by the specific approaches that develop in the process of dealing with them. I can't think separately of one and the other.
For the past two years I have been looking at the European Union´s Schengen borders, their effects on migration and European societies. The working title for this project is Postcards from Europe and it is in some ways related to German Images – Looking for Evidence. 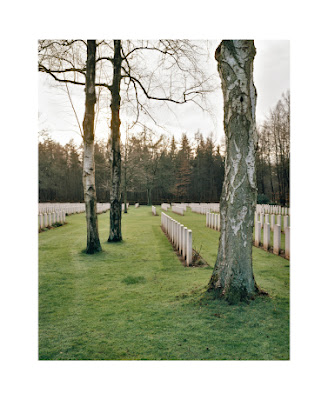 British war cemetery, Kleve-Reichswalde, 2007
On 11 November 2001 a car with Dutch number plates was set alight on the car park opposite the main entrance to the war cemetery. The Dutch owner told the police that he had been playing the bagpipes in the cemetery when a man in a black bomber jacket and army boots aggressively demanded that he play something for a 'Rudolf Heinrich' whose birthday he said had been the week before. The Dutch man refused, and when he returned to his car a short while later he found it in flames. The state security police took charge of the investigation because the possibility of it being a political crime committed by rightwing extremists could not be excluded. They remained inconclusive.
Posted by Stan B. at 12:00 AM

I love this work - it combines pictures and text, beauty and violence, order and hatred in equal measure. Well done for posting it Stan!