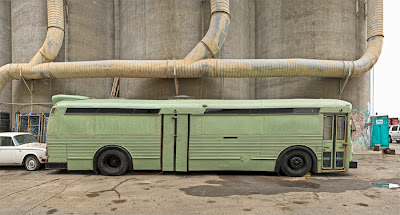 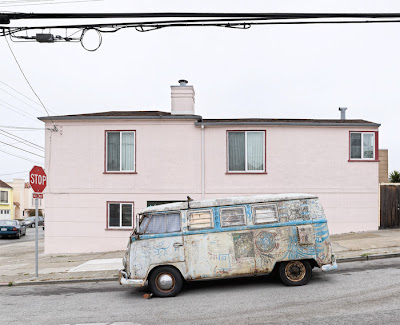 Rayko in The San Francisco Bay Area has a  three person show, two of which I could look at long and repeatedly. Both Alan George and Kirk Crippens concentrate on subject matter within the suburban landscape that has become quite telling of our modern economic reality. Alan George's essay, Wheeled Estate focuses on camper vans- not the grand liesure vehicles of family vacations, but those that serve as primary habitats, the last vehicles of hope and refuge between occupant and street. These mobile homes are usually to be found on the outskirts of the city environs (in this case San Francisco) where everyday eyes are less prone to see either them, or their marginalized occupants. Rather than turn the blind eye however, Alan George celebrates their unique personalities and personas, transforming them from anonymous eyesores into individual works of art that could also be quite revelatory about those they shelter. 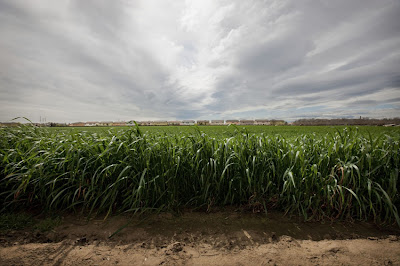 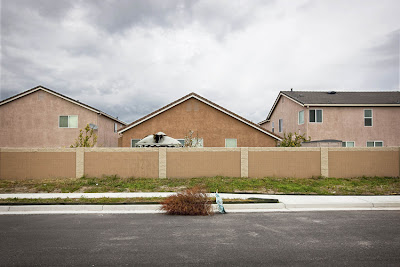 Kirk Crippens turns his eye towards the barren, foreclosure wasteland that has become sunny Stockton, CA. Seems one can stay well within the confines of surburban USA rather than travel to far off Pripyat or Chernobyl to take in startlingly deserted vistas of abandonment and despair. Of course, it was economic fallout, rather than atomic, that laid waste to a large section of Stockton. And Crippens captures the aftermath in his grand vistas, both indoors and out. One of the most jarring photographs is of what has to be the largest tumbleweed in existence (looking every bit the escaped radioactive Hollywood movie mutant) that stands silently entrapped within a vacant backyard. Unfortunately, some of his prints are a bit too large to be fully appreciated in the rather narrow confines of where they are displayed at Rayko- something that I hope is remedied at his concurrent exhibit beginning today at the SFMOMA's Artists Gallery!
Posted by Stan B. at 1:00 AM

Tiptop the pair of them. Cheers Stan.